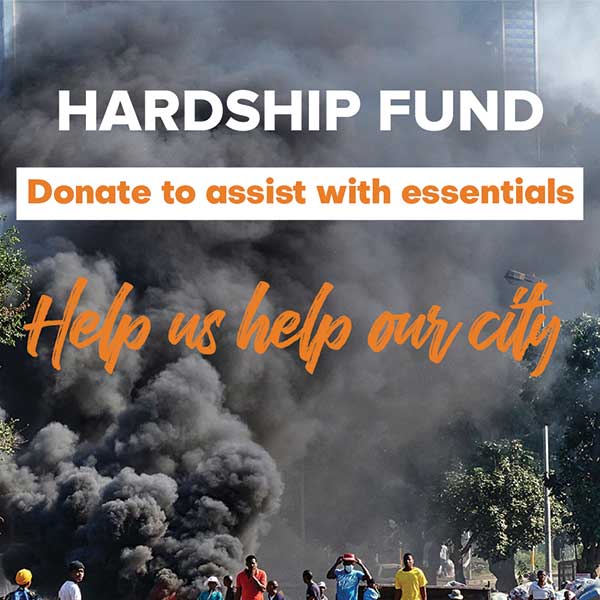 Durban, Kwa-Zulu Natal has been the hardest hit as the majority of supermarkets, factories and warehouses have been looted and set alight. Durban residents are on their sixth day of riots, with limited access to food and fuel. Some isolated areas have one or two supermarkets still not damaged, through efforts of local residents barricading entry points, to keep looters away, posing a number of protection and security risks. These barricades are now also being used to restrict access to non- residents so they can protect their food sources as it is uncertain when stock can be replenished. Many people have been forced to leave the safety of their homes in search for bare necessities such as bread, eggs, milk, and fuel.

People have reported waiting in line for over five hours to try and get food, some with no luck as stock is limited. Lines at fuel stations can also be seen going on for miles as people try to get fuel.

With the South African Police Service being overwhelmed, the government deployed 2500 soldiers in efforts to support them in stopping the relentless looting. This has not worked as more businesses have continued to get looted and burnt down. In some areas there is little to no police or army visibility, so the looting continues, and residents live in constant fear.

Many families are in urgent need of food, especially mothers with young children as they have not been able to purchase baby food, formula, and diapers. Community groups are currently flooded with requests for assistance with food and medication as pharmacies were also looted and burnt down. Hundreds of families are currently living in fear of starvation as it is unclear how long this unrest will last.

Penny Appeal South Africa, who are based in the heart of the protests, are currently working with community leaders to mobilise food items such as canned food, flour, rice, and other essentials, such as baby food and formula, into communities that have been most affected. Some of these communities include Durban city centre, Chatsworth, and Phoenix.

Various bakeries within affected communities have also been identified to assist with baking bread which will be distributed to communities. These bakeries will be provided with the ingredients needed to bake bread-based products that will then be distributed to project participants that currently do not have access to a reliable food source The context of the situation is likely to change rapidly, and as such Penny Appeal will remain flexible to ensure we can adapt our response to meet the needs to the most vulnerable.

The supply chain has been severely disrupted, and this will create a medium to long term food security challenge, coupled with mounting unemployment and the unknown impact of Covid-19.

How can you help?

Help us empower bakeries in areas to bake their own bread and supply communities: